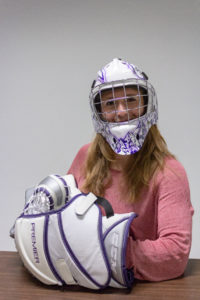 Brenn grew up in Colorado (unincorporated Douglas County, what up!) until her sick goaltending skills took her to New England to play prep ice hockey then to Pennsylvania to play some NCAA puck. Fun fact: She has all her teeth, but broke her jaw after an errant wrist shot snuck under her mask during practice her senior year of college. Always make sure the goalie is paying attention before you shoot, kids!

After graduating with a double major in writing and cultural studies, she, like many graduates of liberal arts colleges, had no idea what it was she wanted to do. After taking a soul-crushing adult job, she set out to travel the world but ended up living in New Zealand for a year. Once she’d perfected a terrible bogan kiwi accent (“fush & chups”), she returned to the US and stumbled into recruiting. She’s been selling the dream ever since. In early 2018, she brought her wizardry to Inflow and says it’s the best job she’s ever had. We didn’t even pay her to say that.

I got a new goalie mask (instead of wearing my smelly 10 year old one from college) and am in the process of getting a Colorado-themed paint job on that puppy.

Do you have a favorite Inflow moment?

It sounds selfish to have a moment about me, but Inflow organized a blood drive and the result of that blood drive was even more enriching than just saving lives. I gave blood and was fortunate enough to almost die afterward. My very compassionate and sympathetic coworkers were kind enough to snap a very pathetic photo of me with wet paper towels on my face and ankles, attempting to eat chips. After I recovered and returned to the office, I found that slack had exploded with multiple custom emojis and a whole host of jokes. The laughter and thorough roasting definitely helped raise my blood pressure back up to non-zombie levels.

If you weren’t doing this, what would you be doing?

Pretending to be a cowboy… working on a sustainable ranching operation.

Scroll back to top